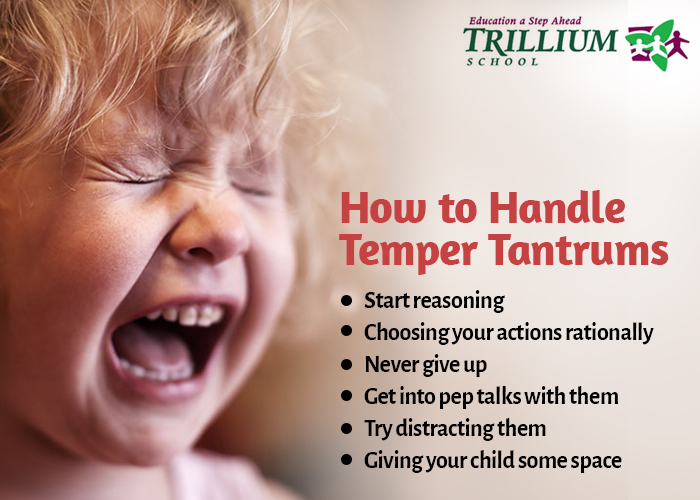 Ever felt embarrassed when your toddler behaves badly in a crowded place? You’re not the only one dealing with your kids’ temper tantrums. There’s nothing to be angry or depressed. Temper tantrums are a normal part of a child growing up. It could be because they haven’t developed good coping skills, or are just frustrated. Whatever the reasons, a few corrective steps can be taken to stop the outbursts.

Children tend to throw tantrums in public areas like the supermarket, park, outside the school etc. When this happens, the best thing to do is to try and reason with the child logically. It may be a long-shot, but that should be your first recourse. If it reached the point where talking doesn’t help, try isolating him/her. This will probably ruin your day, but sometimes it’s the only way. Giving in to all of your toddler’s demands is never a good thing.

Handling your child’s temper tantrums requires immense patience. Though your child’s behaviour is justified, given their age, yours is not. Always remember, that in a fit of a tantrum, logical reasoning stops working. Other modes of punishment, such as shouting, scolding and spanking also don’t work. The best resort is to remain calm and give your child the time he/she needs to overcome the meltdown.

Children have ways of manipulating their parents. They’ll often play mind games to get what they want, though unknowingly. A child might start crying and howling in a public area as they’re aware of how much it distresses their parents. The best thing to do is stick to your ‘no’ firmly. You mustn’t ever give in to their tantrums as this encourages their behaviour. People raising their eyebrows shouldn’t matter as your child matters to you more than anything else.

Talking might not help initially when the tantrum’s at its peak. But after the time has passed, a little pep talk is necessary. Take enough time to explain to your child why their behaviour is unacceptable. Never forget to give a kiss and a hug after you’re done. Also, it’s best to talk in a friendly tone and not to be preachy.

This works with toddlers, but they outgrow the trick quickly. Try to distract your child with something to keep him/her calm during an outburst. A book or a toy could be helpful, or try engaging him/her in a conversation. Telling them a story can bring the situation under control without much fuss.

Children react to overriding emotions and impulses which lead to an outburst. They lack self-gratification, which is an emotional tool which helps in dealing with reality. However, it’s a part of every child’s development. Once they’re calm, they realise that their behaviour wasn’t needed in the first place.

The trick is to be consistent. Plan a routine and stick to it, so your child knows what to expect. Follow the routine as much as possible. Set reasonable limits for every activity and follow them consistently.