Adolescence is a difficult phase for both children and parents. Unpredictable mood swings, unbounded anger over what seems to be nothing, distrust, secretiveness – all this can make parenting extremely difficult.

Teenage tantrums can be fed by several factors including insecurity, fear, peer pressure, frustration, sensory overload, anger and hormonal changes. But you can’t let these emotional outbursts run the house.

Here, we examine a few ways to control your teenager’s emotional outbursts.

6 Ways to Deal With Teenage Tantrums

It can be difficult for parents to reach an agreement about how to deal with an unreasonable teenager. Sometimes, you might lose your temper or simply ignore it because you’re too tired or too afraid of your child’s tantrum. This can spoil or alter them forever.

But ignorance is not always bliss. Here are some simple coping strategies. 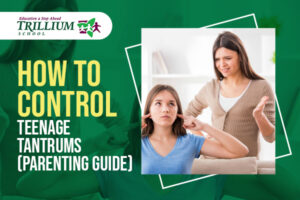 If your teen loses their temper after a long, tiring, and bad day, anger is a common reaction. But losing yours will not only drive a wedge between you but set a bad example too. They will think it is okay to shout at someone and get angry if you don’t like something. So, even if you’re feeling irritated, stay calm, listen to them, and talk only when appropriate. If these strategies don’t seem to be working, try distracting them from the source of anger.

If your child is glued to their smartphone or laptop, banning the gadgets outright won’t help, nor will imposing an earlier curfew. You will need to make them want to spend some time away from the screen by getting them to participate in outdoor activities.

Be creative. It will not only restrict your child’s screen time and control their tantrums, but connect them to the rest of the family.

Summer camps usually leave a lasting impact on kids. They learn new skills and may, in a safe and nurturing environment, discover something they are passionate about. And when their energy is diverted into something creative, they won’t have much time or energy left over for emotional blow-ups. Moreover, meeting kids their own age, making friends, and examining their own lives will give them better insight into – and hence control over – themselves.

It’s easy to think that your teenager isn’t mature enough to make their own decisions. But trusting them is the best way to handle their tantrums. If they realize they have a measure of control over their own life, they’ll also realize that they’re responsible for their mistakes. This will make them more careful about their actions and bring them closer to you. If they trust you, they’ll include you more in their life and you’ll be able to relax more, knowing they’re capable of making their own decisions. Reminder: that doesn’t mean you should kowtow to all their whims.

5.     Ensure They Get a Friendly School Environment

School plays an important role in your child’s overall development. Their teachers, peers, the help they provide, and the school’s caring environment can make their transition into a good adult easier.

Extracurricular activities, counselling, and supportive teachers all keep teenage tantrums from boiling over and guide them towards the right path. So, look into the best schools near you and find the high school programs that are ideal for them. Keeping them engaged is the best way to deal with their outbursts.

Reward often works better than punishment, but we too often call out our kids for their mistakes while rarely appreciating them for doing something right. Rewarding them builds trust and makes them want to do better. If your child accepts your decision politely, even if they don’t like it, reward them by doing something they like, or gifting them something they’ve been wanting for a long time. Similarly, reward them for accepting when they’ve made a mistake, if they help you in household chores without creating a fuss, or if they tell you about their day unprovoked.

Remember, it’s important to know the ‘why’ behind your teenager’s outbursts. At this stage, they think the world revolves around them and that their needs are the only ones that matter – something you may have been reinforcing for years. They want to be independent (or not), depending on what suits them at that point. And when everything doesn’t go their way, they can lose control of their emotions. Dealing with them calmly will take you and them through this phase far more smoothly.